Rabbi Benjy Bar-Lev joined the rabbinic staff of Temple Beth Shalom in the summer of 2008. As of July 2017, he serves as the congregations Senior Rabbi. Rabbi Bar-Lev says of TBS that, "our creative possibilities here are endless. Temple Beth Shalom is a warm, inclusive and truly dynamic place. I'm very blessed to have found TBS, my congregational soul-mate!"

"Rabbi B" (as he is known at Beth Shalom) was born and raised in Milwaukee, Wisc. He went to college at a small university in Kenosha, Wisc., called the University of Wisconsin-Parkside. During his college years, he began working as a religious school teacher, a Hebrew teacher, Youth Director, a song-leader, and finally as Rabbinic Intern at a small synagogue in Kenosha called Beth Hillel Temple. He is also a life-long Jewish camper, and for the past 16 summers has been a camper, counselor, program director, unit leader, administrator, and Camp Rabbi of a JCC camp called "Interlaken" in the North Woods of Wisconsin. He also serves on faculty each summer at our local URJ residential camp, Goldman Union Camp Institute (GUCI).

During Rabbinical School in Cincinnati, Rabbi B became the Youth Director at Temple Sholom, a job he had for four years. During his first two years in Cincinnati he also worked as Coordinator of Yeshivat Noar, a 7th and 8th grade program that combines junior youth group with formal Religious School classes. He taught, coordinated, and wrote curriculum for that program. During those first years he also began teaching in the Cincinnati Reform Jewish High School and wrote lesson plans and curricula for classes there as well.

Rabbi Bar-Lev has a passion for Jewish education and loves teaching both adults and children about Jewish traditions, music, texts and ethics. He enjoys leading Shabbat services, officiating lifecycle events, and spending time with and counseling congregants.

Rabbi Bar-Lev lives in New Albany with his wife, Dr. Lauren Bar-Lev, a Pediatrician at the Ohio Center for Pediatrics in Dublin, and their beautiful children, Sammie, Jake, Asher, and Noah.

Rabbi Lenette was born in California and after moving around the country grew up in Phoenix, Arizona. She became passionate about Judaism while studying for her Bat Mitzvah, and became more involved in her Jewish community through youth group, summer camp, and a Jewish high school. She soon realized that becoming a rabbi was her calling while teaching religious school in college at Arizona State University.

Rabbi Lenette was accepted to HUC’s rabbinic program upon graduating from undergrad. She spent an incredible six years at HUC, first living in Israel for a year, and then living and studying in Los Angeles. She has served synagogues, religious schools, and other Jewish communities around Los Angeles. Rabbi Lenette also engaged in an additional year of study to receive a Masters in Jewish Education.

In her spare time, Rabbi Lenette enjoys reading (especially comic books), yoga, gardening, and hanging out with her two cats.

Gail Rose is the 2013 Jeff and Lori Lasday Jewish Educator of the Year. The award, presented by the Columbus Jewish Federation, recognizes outstanding Columbus Jewish educators, awards winners a grant to be used toward a professional growth activity. Gail is the first Temple Beth Shalom educator to receive this prestigious community award since its inception in 1997.

She co-directs Koleinu, the Columbus Community Jewish Choir, is one of the directors of The Martin Luther King Commemorative Choir, leads the Hadassah Community Tu B’Shevat Seder and the Women of Beth Shalom’s Passover Seder.

Gail holds a Bachelor’s and a Master’s Degree in Music Education from The Ohio State University. She taught vocal and general music in the Lancaster, Southwestern and Worthington City Schools.

Rabbi Howard L. Apothaker, Ph.D. has served as Rabbi for Temple Beth Shalom of Columbus/New Albany, Ohio since 1980. As a student rabbi, he served congregations in New York City. He has also served a start-up congregation in Beer Sheva, Israel.

A native Philadelphian and honors graduate of Brown University (1974), Rabbi Apothaker was ordained at the Hebrew Union College-Jewish Institute of Religion (NY, 1980).

He holds an M.A. from HUC-JIR in New York (1977), and a Ph.D. in Rabbinic Literature (HUC-JIR, Cincinnati, 1996). He has been a Visiting Graduate Student at New York University, The Jewish Theological Seminary in Jerusalem and The Hebrew University of Jerusalem.

He has won numerous academic fellowships, including the Daniel Jeremy Silver Fellowship at Harvard University (1999-2000). He has served as an adjunct instructor at Capital University and The Ohio State University and has lectured, inter alia, at Franklin University, Otterbein College, Ohio Dominican University, and Mt. Vernon Nazarene University. He has written a book on classical rabbinic midrash —Sifra, Dibbura de Sinai: Rhetorical Formulae, Literary Structures, and Legal Traditions (Hebrew Union College Press, 2003), has published numerous scholarly articles, and has lectured at a variety of academic conferences.

Rabbi Apothaker has also served on the Board of the Central Conference of American Rabbis, for which he has also served on a number of national committees, including the Committee on Reform Jewish Principles (1999). He has served as president of the Great Lakes and Ohio Valley Association of Reform Rabbis.

In addition to congregational and Jewish community activities, Rabbi Apothaker was the founding president of the Interfaith Association of Central Ohio and the local chapter of Children in Grief. He is a founder of the Congregational Alliance of New Albany (where he has served as president). Rabbi Apothaker has served on the faculty of the URJ regional camp, the Goldman Union Camp Institute. Among other honors, Rabbi Apothaker has received the Buckeye Boys Ranch Award in recognition of Community Accomplishments and Continuing Influence in Religion with in the Community.

Rabbi Apothaker was a college wrestler, rowed on the crew team, and still participates in a variety of athletic activities. He has composed liturgical music and enjoys singing. He is married to Marcie Golden and has two daughters, Elianna and Leah. 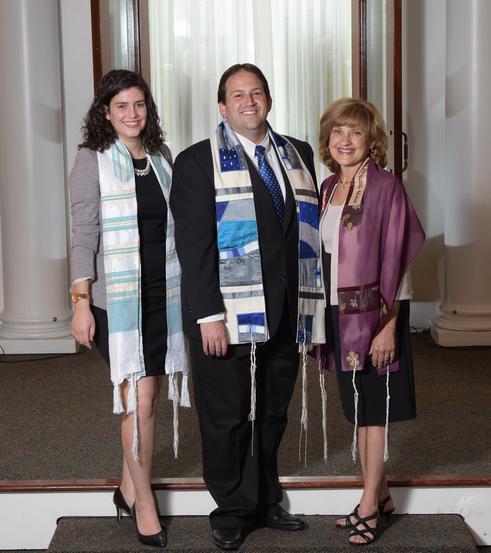